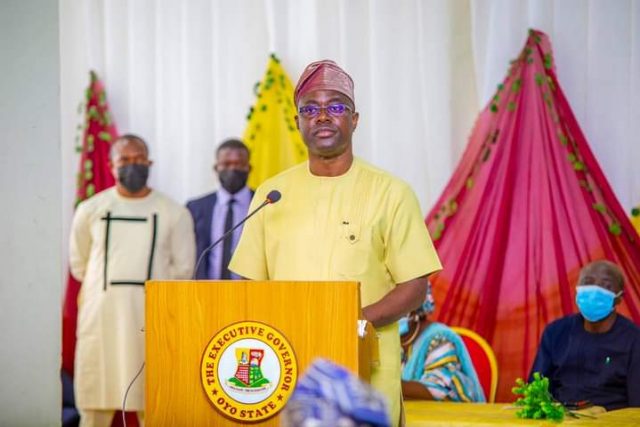 One of the criminal elements in Ibadan, on Saturday, fell to the bullets of offiers of the Oyo State Security Network Agency, codenamed Amotekun.
The News Carrier NG reports that fresh crisis involved members of Soludero, a local vigilante group and some criminal elements around Sasa Area, Ojo, Akinyele LGA of Oyo State.
A criminal element, Idris Kabaki was allegedly shot by Amotekun operatives.
Public Relations Officer of the State Police command, Adewale Osifeso confirmed the death of the deceased in the fresh crisis.
He maintained that the deceased was a member of a criminal gang.
Osifeso, in a statement, stated that the deceased sustained gunshots wounds and died after he was shot.
Osifeso said, “Sequel to the face-off between members of Soludero, a local vigilante group and some criminal elements around Sasa Area, Ojo, Akinyele LGA of Oyo State while on routine patrol, yesterday Saturday 31st July 2021, at about 0400HRS during which one Kabati ‘m’, a member of the criminal gang sustained gunshot injuries and was confirmed dead at the hospital.”
Oyo Amotekun lost seven personnel in eight months –Makinde
Meanwhile, the Oyo State Amotekun has lost seven of its personnel since its establishment in the state.
Gov. Seyi Makinde disclosed this on Thursday in Ibadan, during a stakeholders’ consultative meeting on the 2022 budget, held at the International Conference Centre, University of Ibadan.
The News Carrier NG, on November 18, 2020, reported the inauguration of 1,500 Amotekun corps by Governor Seyi Makinde. According to the governor, Amotekun is to complement the efforts of the conventional security agencies in combating insecurity in the state.
He said that the deceased met their untimely deaths in the course of ensuring that every nook and cranny of the state was secured.
The governor, who announced the donation of N2.5 million to each of the families of the deceased, promised to give scholarships to the children of the victims and assist in their respective areas of need, assuring that the deceased would not die in vain.
He also assured the people of the state that his government would continue to deploy resources in ensuring that the state was secured.
Makinde urged residents to be vigilant and call his government’s attention to any suspected security threat in any part of the state by dialling 615, assuring of a prompt response

Makinde Keeps Mum As Govs Umahi, Ifeanyi Fire Fani-Kayode. “He Played No Role in My Defection to APC – Umahi