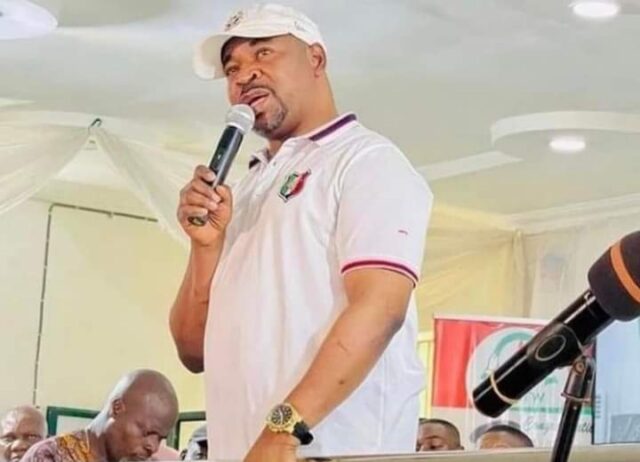 It was gathered on Friday that despite the suspension of NURTW activities in Lagos, many foot soldiers of the union were sighted on Friday morning in many parts of the city still operating, collecting dues from transporters.

NURTW members were seen on Friday morning collecting money from transporters
Many were fully kitted in the union uniform while some others wore caps, aprons or materials with NURTW name or logo.

This is also a defiant to the earlier pronouncement by the suspended acting state chairman, Musiliu Akinsanya popularly called MC Oluomo, who said that the Lagos NURTW was pulling out of the national body.

The Lagos State governor has suspend the operation of NURTW in Lagos state due to the power tussle between the National Body and the State chapter.

Lagos Reporter’s had earlier reports that The leader of the NURTW in Lagos Musiliu Mc Oluomo had pullout of the National Body of the NURTW following is suspension by the body and called on the Governor to suspend the operation of the union in the state.

According to a statement issued on Thursday by Gbenga Omotoso, Lagos commissioner for information, the suspension is part of efforts to douse tension over the recent developments

Read the full statement below:

The Lagos State Government has been watching closely events in the National Union of Road Transport Workers Union (NURTW). There have been claims and counter claims over the control of the union.

The Government has a duty to ensure the safety of lives and property of all Lagosians and visitors. Therefore, there is an urgent need to douse the unnecessary tension generated by the leadership tussle in the NURTW and protect the citizenry from the likely fallout of the situation.

After considering the provisions of the law, the Government hereby suspends the activities of NURTW, which must cease to operate in all parks and garages in Lagos State. The Government will set up a Committee to immediately take control of the parks and garages. Members of the committee will be key stakeholders in the sector.

The Government’s position is premised on its responsibility to ensure that there is no breakdown of law and order in all parks and garages in Lagos State.

‘Battleboy’ Seeks Redemption From Gateway Fight Night, To Slug It Out With Sodiq Ibrahim In National Lightweight Category

NNPC Embarks on 24hr Loading of Petrol To Address Long Queues. Nigeria Has 1.9bn Litres To Last For 32 Days — Minister