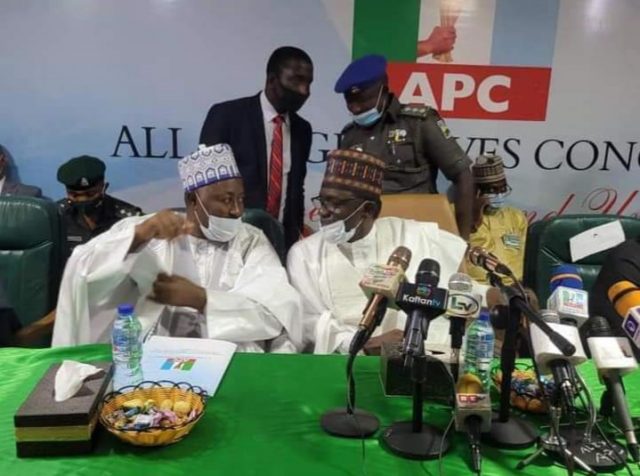 The Progressives Governor’s Forum has mandated Governor Mai Mala Buni-led APC Caretaker/Extraordinary Convention Planning Committee, (CECPC) to proceed with the conduct of local and states Congresses that would lead to the party national convention.

The APC governors, at a meeting held at Kebbi State Governor’s Lodge, Asokoro Abuja expressed satisfaction with the outcome of the ward congresses.

They further restated their earlier position that the judgement of the Supreme Court in a suit filed by the People’s Democratic Party candidate in last October governorship election, Eyitayo Jegede SAN challenging the eligibility of Governor Buni to sign the nomination form of Rotimi Akeredolu did not fault the eligibility of the Yobe state governor to combine both elective and party offices, concurrently.

The Resolutions of Meeting of Progressive Governors signed by Kebbi state governor and Chairman of the Forum, Abubakar Atiku Bagudu, commended all party members for commitment to the process of rebuilding the APC and urge them to give support at all times.

“Forum further reviewed progress being made by the APC Caretaker and Extraordinary Convention Planning Committee in the effort to rebuild structures of the party at all levels and commends members of the Caretaker Committee led by His Excellency, Mai Mala Buni for the successful conduct of the Ward Congresses across the country.

Accordingly, Forum reaffirmed its support for the Caretaker Committee to proceed to conduct Local Government, State Congresses and National Convention, in line with the mandate of the National Executive Committee.

“Forum was further briefed on the July 28, 2021, judgement of the Supreme Court on Ondo State 2020 Governorship election and recognise that the legal status of both the APC Caretaker and Extraordinary Convention Planning Committee, as well as its composition, has been legally settled. The forum had earlier commended the Supreme Court for the timely release of the written Judgement and expressed gratitude to APC legal team for the successful defence of APC’s electoral mandate in Ondo State. Forum congratulates the people and government of Ondo State for the legal victory.

“Having reviewed progress in the party, Forum commend all party members for commitment to the process of rebuilding the APC and urge them to give support at all times. In particular, Forum notes satisfaction reports from various states of commendable mobilisation and participation in the July 31st, 2021 ward congresses. All the states reported successful conduct. ”