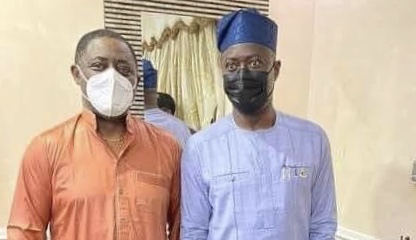 Ebonyi State Governor, Dave Umahi has said that former minister of aviation and newest APC member, Mr. Fani-Kayode played no role in his defection to the APC.

Umahi made the clarification on Friday while featuring on Channels Television’s Sunrise Daily. The governor described Fani-Kayode’s claim as an insult.

Fani-Kayode while speaking to journalists after he was presented to the Buhari, revealed that he was responsible for defection of three PDP Governor to APC. He mentioned Governors Dave Umahi (Ebonyi); Ben Ayade (Cross River) and Bello Matawale (Zamfara) and few other PDP chieftains.

The News Carrier NG reports that only Governors Umahi and Ifeanyi have so far debunked FFK’s claim; Governors Makinde, Bala, Ifeanyi and others are yet to react.

Umahi said Fani-Kayode must withdraw his statement, adding that the ex-minister was “never” part of the discussions that led to his defection.

“Fani-Kayode needs to withdraw that statement. He is my good friend but it was an insult to my person and the other governors. The man did not know when I moved but, incidentally, he visited me and we discussed and he said he was coming to join me with other governors to declare”.

“How would somebody in PDP be instrumental to my moving, a whole governor of a state, not even a small governor – an experienced governor. So, he has to withdraw the statement; he was never part of any discussion of my movement. I moved the South-East to the centre of administration; I moved to close the gap between the centre and South-East which our forefathers, like Nnamdi Azikiwe, fought for. He remains my friend but he played no role in my movement and I am sure he did not play any role in the movement of others.”

Enugu State Government, in its reaction, described the possibility of Governor Ifeanyi Ugwuanyi joining Fani-Kayode in the APC as a distraction.

The State Commissioner for Information, Mr Chidi Aroh, said, “You should tell Fani-Kayode to explain more about what he said because my governor is the chairman of the PDP zoning committee doing his work in that committee and he is also providing dividends of democracy to the people of Enugu.”