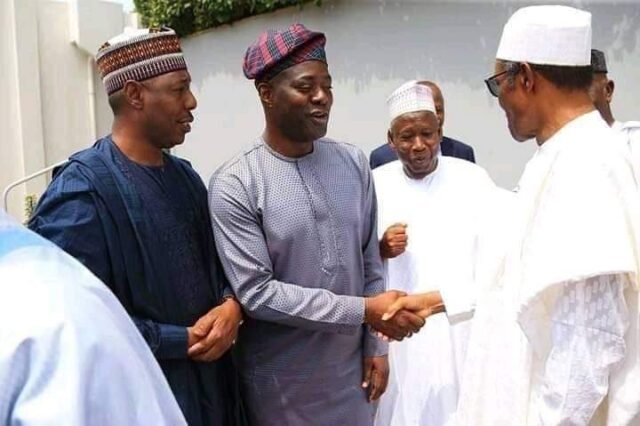 The Chairman, Association of Local Government of Nigeria (ALGON) in Oyo State and All Progressives Congress (APC) chieftain, Prince Ayodeji Abass-Aleshinloye has said if Oyo State Governor, Engr. Seyi Makinde, defects to APC, it would be a bad market for the party.

Recall that there are insinuations in some quarters that the PDP governor is planning to join APC, due to the internal wrangling within the Peoples Democratic Party(PDP) in the South West. Also, the Chief Press Secretary to Makinde, Taiwo Adisa, had recently said it is the APC that is wooing the governor.

But in an interview on Ibadan-based radio station, Splash 105.5FM, on Tuesday, Abass-Aleshinloye said the governor can’t join APC because of his performance.

He said:” How will APC as a party welcome Seyi Makinde? That means he is not principled enough. I heard he is making that effort but if he wants, he should go to his local government and not Abuja because he is free to join any party of his choice.”

When asked if the party will welcome the governor, the ALGON boss said: ”We will welcome him but he should go back to his ward and not Abuja to say he wants to join APC, they will accept him from his ward because you must go from your ward to local government. He won’t even try it because that means he is not principled enough. He has said so many unprintable words about APC. Seyi can’t come because even his performance can’t make him come, it will be a bad market.”

Abass-Aleshinloye also said APC will not participate in the local government election slated for May 15 by the Oyo State Government, describing it as a charade. He said it would be it would be a serious contradiction for APC that its candidates who were unjustly removed from office and went to court to seek redress to be participating in another election without judgement being served.

“We took the government to court so we won’t do that. They know why they couldn’t participate in the election we had under Ajimobi because I told you that PDP was not a party then.

The ALGON boss further stated that Makinde would not have defeated the APC candidate in the 2019 governorship election, Chief Bayo Adelabu, if not for the parties that came together to form a coalition.

Speaking on why Adelabu didn’t have the support of the coalition, Abass-Aleshinloye said:“A lot of things happened then and I won’t like to discuss it here.

“A lot of things happened then and I won’t like to discuss it here. Bayo Adelabu is a strict person and the offer is that you will have to give them certain percentage. He would have to discuss with the party but Seyi Makinde is always saying ‘yes’ to their offer and Bayo can’t be saying ‘yes.’ Adelabu is a principled and factual person. Where are those people who worked with Seyi when he was saying ‘yes’? But we will forever continue to respect Adelabu. He is not arrogant at all; he will tell you what he can do and will also carry his party along. He told the merger that if you want beyond this, you will have to meet my party. Look at all their debate, he gave the stuff he was made of. He is very brilliant.”