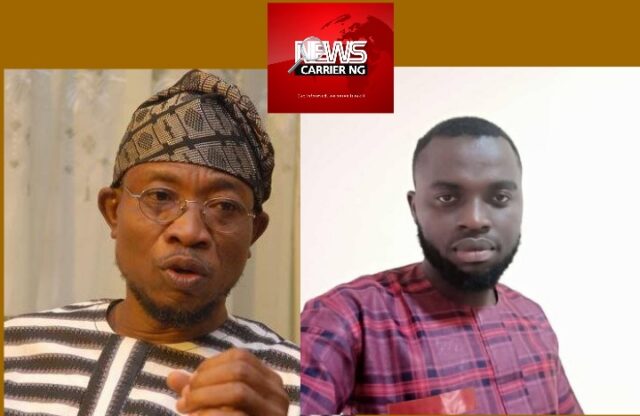 It is interesting to note that each time Rauf Aregbesola, the immediate governor of Osun state visited Osun state after the expiration of his tenure, he either dropped a bomb or stirred hornet’s nest. The very first public appearance he made in Osun after being appointed as a minister was the turbanning ceremony. Aregbesola always take his shot at individuals, institutions or pressure groups during public functions.

When league of Imams and Alfas turbanned him as the Amirul Wazirul-Muminina of the state in Osogbo, Aregbesola mounted the podium, felt disappointed with the state’s absence, probably retinue of loyalists who have switched sides and bitterly made a short but thought provoking statement and ended it with “Eyin Nu Olohun Nu”. His utterances unsettled camps within the party, the political atmosphere in the state became tensed before subsequent events took over.

Immediately after the event, Aregbesola took a sabbatical leave from politics either local or national and focused on his primary assignment as a minister of the federal republic of Nigeria. Truly, he took a leave but was always briefed at night by some of his lieutenants who dined with his successor in the day. A top source told me that Aregbesola technically declined the requests of Governor Oyetola to revalidate his membership card after the governor and the national leader of the party, Bisi Akande had revalidated their cards.

But the same Aregbesola who declined all offers left his comfort zone in Abuja barely four days his sworn political enemy and opponent, Otunba Iyiola Omisore to revalidate his membership card at his polling unit in Ilesa, an ancient town in Osun state. Aregbesola did not only come to revalidate his membership card but he came to pass a message and that was why he ignored or technically declined all the requests of his successor. Aregbesola said “Murderers of his uncle, Bola Ige have joined their party and the party constitution does not deny murderers membership cards but the genuine progressives would not allow murderers in disguise of progressives take over the party structures”. That was the message he came to drop, the message really stirred hornet’s nest and worsened the sick state of the party.

Aregbesola in his usual habit stormed the ancient city of Ilesa to celebrate a week old birthday with friends, relatives and political associates. He ignored party talks and acted in full capacity of his office as the interior minister and declared people agitating for Yoruba nation as ‘idiots’. I was really shocked and pertubed that Aregbesola could call these agitators ‘idiots’.

Like Aregbesola, many of us have reservations about the characters and contents of the struggle. Most reservations were birthed from the content and quality of characters of people pursing this struggle. Many people have doubted the capability of the ‘questionable movers’ to intelligently achieve their goals while some people who know about the selfishness and greediness of our elites including movers are afraid that if this escalated, it may result to war which will bring more misfortunes and tragedies.

From agitating against the killings and silence of government to secession, the rapid growth of this struggle and how it carries majority of the people should be a source of worry.

To Aregbesola; land grabbers, political thugs and sore political losers who are probably taking the front lead are behind the call for secession but if he can come down from the ladder he’s and moves across the nooks and crannies of the entire south west, he would know the extent of the struggle. I belong to the downtrodden. I relate with our people across streets, districts and quarters. The only demand on their lips is ‘Yoruba Nation’ and they do not really care about the consequences of the secession. This is why these movers must not be treated as ‘idiots’ but be lobbied to surrender to prevent escalation. It will be too damaging for Nigeria.

People just want freedom. They want peace and harmony. In the past, if you want to rest or run away from frustrations, people go to the forest and camp for days but it is quite unfortunate that these forests have become hideouts for kidnappers, armed herdsmen and criminals. As much as I do not believe in profiling of criminals, our people strongly believe that the Fulanis are the ones responsible for the killings and kidnappings in their base. They want protection and the government Aregbesola represents has failed woefully in that regard.

Two days ago, more than 20 people were brutally murdered in Igangan, Oyo state. The sorrowful tale of this killing is not different from the harrowing tales of many unreported killings in forests. Hunreds of farmers have been killed and sizeable number of farmlands have been ruined. If we do not want people to clamour for secession, what are our reactions to these sad developments? As a minister of the federal republic of Nigeria, what are your (Aregbesola) positions on the killings and what have you done as a south-west leader? You do not ask people to drop their agitations or call them ‘idiots’ for peacefully making known their positions and grievances but you make them see convincing reasons to drop their agitations.

When there were no killings in the southwest, Aregbesola as a governor promoted core values of Yoruba. He introduced “cowries” to Osun logo, enforced public school students to wear ‘cowries-imprinted uniforms’ and mandated the singing of Oodua anthem in public schools and state functions e.t.c If all these were not pointers to secession, they surely represent an idea not fully formed or why did Aregbesola spend billions of naira to give Osun a different representation among states? As strange as most of these things were, nobody called Aregbesola an ‘idiot’, then why should peaceful agitators be called ‘idiots’.

Some opinion moulders posited that Aregbesola now dines with the inner cabal of the presidency. They explained that the swift orientation he had witnessed within a year in office as interior minister caused the ‘goof’. Others described the interior minister as someone battling with ‘mouth diarrhoea’. I believe that Aregbesola again came to drop a message but this time around, both the messenger and the message mean nothing to the people.