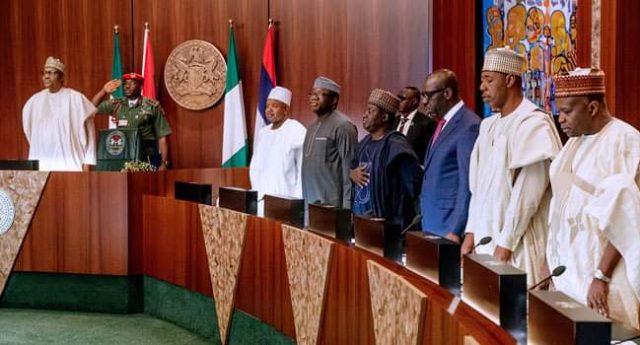 The progressive governors are set to meet with President Muhammadu Buhari and other leaders of the party to resolve all the issues surrounding the pending national convention of the party.
No fewer than 20 APC governors met on Sunday night behind closed doors at the Kebbi State Governor’s Lodge, in Asokoro, Abuja.
Those in attendance included governors of Kebbi, Kogi, Nasarawa, Katsina, Plateau, Ekiti, Jigawa, Kano, Kwara, Imo, Borno, Ebonyi, Lagos, Zamfara, Niger, Ogun and Cross River.
Addressing journalists after the close of the meeting, Governor Abubakar Atiku Bagudu (Kebbi State), disclosed that the governors, during their deliberations, passed a vote of confidence in the party’s Caretaker Chairman and Governor of Yobe State, Mai Mala Buni, saying they approved of the congresses conducted by his committee and urged aggrieved members to seek redress through internal mechanisms.
Aside thanking other members of the caretaker committee for a good job so far, the governors, Bagudu further hinted, recognised the outcome of the recent Anambra State governorship election, which produced the candidate of the All Progressive Grand Alliance (APGA), Professor Chukwuma Soludo, as victory for Nigeria.
Fielding questions from journalists, Bagudu, who is the Chairman of Progressive Governors Forum (PGF), however, declined to confirm whether the zoning arrangements for the national leadership of the party was discussed at the meeting ahead of the party’s proposed national convention.
He also denied that the meeting with the President was to convince him not to assent to the Electoral Act amendment bill, but to discuss the forthcoming national convention of the party.
Bagudu stated: “I said we are going to meet with our party leader (Buhari) and we appreciate your interests and we will certainly keep you informed.”
On the Anambra governorship election, Bagudu, who described it as a victory for Nigeria, stressed that it was the right of the party’s candidate to express his view on the outcome of the election.
“That an election took place in Anambra, I think Nigeria has won, and the president has made a statement about that and we are equally proud of our security agencies.
“The parties’ candidates in all elections have the pride of place to determine their views about the outcome. But we are proud that under the APC, an election that hitherto thought to be impossible had taken place,” he said.
Bagudu also allayed the fears that the ruling party might implode in view of the crisis rocking the party.
According to him, “This is a party, which was not only able to mobilise into its fold three outstanding governors into the party, the Deputy Governor of Anambra State, members of the National Assembly, distinguished Nigerians from all walks of life and this is the party where the party leadership is humble to say that all Nigerians join us so that we unify and serve Nigerians.
“While other Nigerians are sending people away, we, despite our strength, inviting them to join us so that together we reposition and keep the progress agenda.”