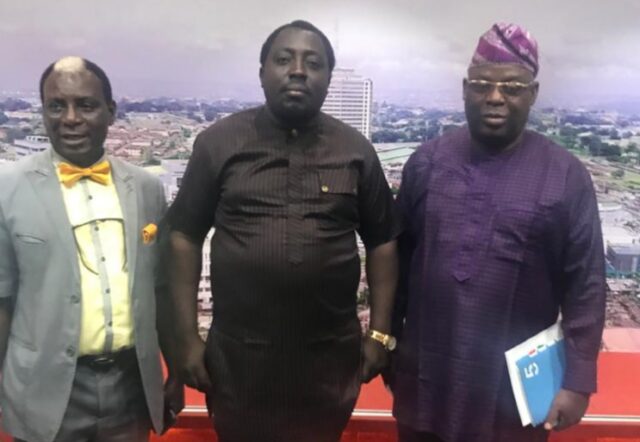 The Global President of LAUTECH Alumni Association, Hon. Onilede Solomon on Thursday attended inauguration of the newly appointed Pro-Chancellor and members of the Governing Council of the institution.

The inauguration ceremony, which was held in Executive Council Chamber of Governor’s Office, was conducted by Governor Seyi Makinde.

This newspaper understands that Alumni President is an automatic member of the governing council, according to LAUTECH Edict. 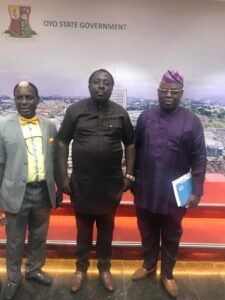 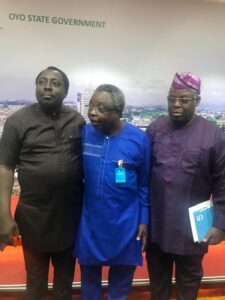 Governor Makinde while delivering his speech
said the inauguration was to further address the challenges confronting the institution. He charged members of the governing council to take necessary measures and pursue vigorously strategies and tactics that will elevate the institution to a world class university. 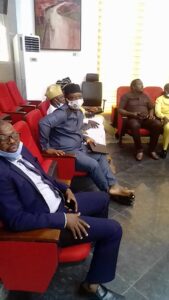 “We are here today to inaugurate the Governing Council of the Ladoke Akintola University of Technology, Ogbomoso. From the countenance of everyone here, we can see that we are all on the same page regarding the future of the school and where we want it to be. 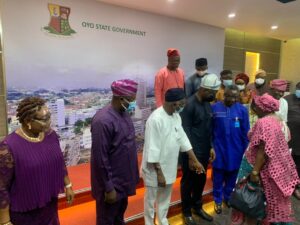 “The role of the Governing Council is almost invisible, still, their impact is undoubtedly felt in the direction that the school is headed. Their position is very strategic and one of their core duties is overseeing and ensuring accountability on the part of the school’s direct administrators.

“It is definitely not a position that one takes up and goes to sleep. It is a special call to duty and service. If we are looking at the caliber of people on this board, I am convinced that you are up to the task. It was not a mistake that two of the members today; Professor Omole and Mr. Adeosun Idowu were both the Chairman and Secretary of the Team that assisted the Oyo State government to get LAUTECH back. 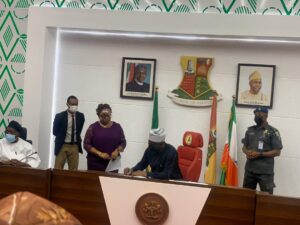 “After we signed the deal on LAUTECH, I started getting calls, people wanting to be on the Board and all of that but I gave the initial committee a mandate to go out there and get a divorce. When I gave the assignment, I knew it was going to be tough, especially where there is no halfway point for them but they came back and deliver 100 per cent on that mandate. So, I am giving you another mandate today and I am sure you will still deliver 100 per cent.

“What is the specific mandate we are giving you? We want you to take the necessary measure and pursue vigorously all strategies and tactics that will make LAUTECH a world-class university. That is the mandate. So, what you are getting is an opportunity to shape this school for future generations. We no longer have the excuse to say one state or the other is holding back the school’s progress. So, I encourage you to get the job done and I am sure you will get it done.”

“Be assured of the continuous support of the government in this regard. Let it be that the next news we will hear in the future is that because of the work you did, LAUTECH has broken into the list of top ten universities in the world.

“I challenge you to key into this vision. We are not talking about the top ten in Nigeria but in the world. You should already know that we want you to take us from the 13th position to the 1st position. I know it is a big task but that is why your mandate is to make LAUTECH into a world-class institution. So, the benchmark is not even Nigeria but looking at the universities around the world. 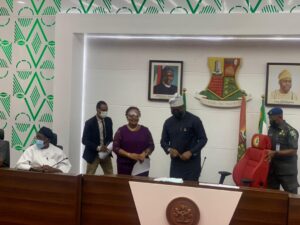 “I want to finally restate that we have confidence in you, even the statutory members. It is going to be sixteen of you in the first instance. We want you to provide leadership that will bring everybody together to move the school towards its mandate. We know you can take LAUTECH to the point you want it to be and we look forward to hearing the next big news. And, by the grace of God, the news will be that Ogbomoso’s number one has become Nigeria’s best.”

In his remarks, the chairman of the newly inaugurated governing council of LAUTECH, Professor Ayodeji Omole, assured that the challenges confronting the university will be surmounted.

“Well, we only need to face the job squarely. We know for a fact that LAUTECH has a lot of potentials but, unfortunately, somewhere along the line, there was a crisis and the university could no longer focus on its core mandate. But we thank God that we have a Governor who believes that the only instrument for development is through quality education.

“I am also sure that you have heard that he has promised to give the institution all the necessary support to transform and rebuild the university. We know there a lot of challenges, especially some crop of staffers that are not motivated. You cannot owe somebody 8-10 months salary and expect such person to put in the best.

“So, we know we are going to have a lot of challenges but we will overcome them and the University will be put on a proper footing to face the challenges of development desired of a university that really worth its name.

“On the first position, the Governor wants us to move the university to, there is nothing impossible. The Staff in LAUTECH doesn’t have inferior brains to those people in the first ten universities in the world. Our Staff has competed favourably with those scholars and we know that, with adequate motivation, incentive and good working environment, all those things can be achieved.”